Role of Dual-Staining Cytology in the Triage of Women

Over the past 40 years, cervical cancer screening (CCS) is credited with reducing the incidence of cervical cancer such that a woman’s lifetime risk for cervical cancer has reached a low of 0.6% in the United States.1 Extending this trend line will require continued diligence and the emergence of improved patient management in the triage process.

The underlying cause of almost all cervical cancer is a persistent infection with certain carcinogenic human papillomavirus (HPV) genotypes, notably high-risk HPV (hrHPV) types 16 and 18. There are also 12 other HPV genotypes that have been associated with the development of cervical cancer, but infection with these HPV types confers generally less risk that do HPV 16 and 18.2

Identification of cytological changes using the Papanicolaou (Pap) test was the primary CCS strategy for many years.3 Cytology-based screening is associated with high specificity (86%-100%) but low sensitivity (30%-87%), and substantial subjectivity can exist between observers.4 Conversely, molecular techniques that detect HPV DNA are highly sensitive (approximately 95%) but have lower specificity when compared with cytology.5 Currently, either cytology alone, HPV testing alone, or a combination of both (co-testing) is used for CCS.3 HPV testing can also be used to triage minor abnormal cytology that could potentially progress to a higher-grade lesion.6 However, given the low specificity of HPV testing and since HPV is widely prevalent, especially among women >30 years, many women in that age group may have indeterminant results and undergo a confirmatory colposcopy.7

Current guidelines recommend that women who are hrHPV 16/18+ on a primary HPV screen should triage to a confirmatory colposcopy, while women who are HPV positive for any of the other 12 HPV genotypes should triage to a cytology evaluation. If that cytology evaluation is negative, the woman can be followed up after 12 months.8 In light of the relatively low sensitivity of cytology, many women who are HPV positive (non-HPV 16/18) may need repeated cytologic follow-up or be directed to a possibly unnecessary confirmatory colposcopy. Thus, there is a need for better biomarkers to identify women at high risk for developing high-grade cervical intraepithelial neoplasia (CIN) following an indeterminate initial CCS result.9 Application of p16/Ki-67 dual-staining cytology may well offer a triage option to address this unmet need in CCS.

p16INK4A (p16) is a tumor suppressor protein that is encoded by the CDKN2A gene.10 p16 is known to inhibit cell cycle progression by binding to cyclin-dependent kinases; its normal expression in cervical cells is very low. However, in cells infected by HPV, a negative feedback loop induces p16 overexpression and accumulation in the nucleus and cytoplasm. As a result, p16 immunohistochemical staining of cervical biopsies can be used as a surrogate marker for hrHPV infection, and along with an abnormal histologic architecture, it supports a finding of CIN2 or CIN3.10 Thus, diagnostic accuracy improves with access to the histologic architecture of the biopsy specimen as well as the presence of p16 immunohistochemical staining.

Cytology is different than histology in that the latter provides architecture as part of the analysis. In cytology, there is no architecture to evaluate, so Ki-67, a second biomarker, is added. Ki-67 is a cell proliferation marker that is encoded by the MKI-67 gene and is expressed in all phases of the cell cycle.11 Under normal physiological conditions, the overexpression of p16 and expression of Ki-67 is mutually exclusive and does not occur in the same cell.12 Therefore, co-expression of p16 and Ki-67 in cervical cells, such that the cells that are p16/Ki-67 dual-stained positive (Figure 1), indicates 1) the presence of a transforming HPV infection; and 2) that this woman is at high risk for developing a high-grade lesion. 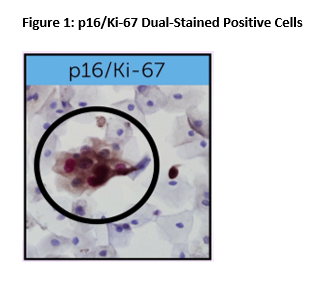 Several studies have reported on the utility of p16/Ki-67 dual-staining cytology to guide the triage of women with indeterminate findings from their initial cervical cancer screening.9-13 In the ATHENA trial, women who tested positive for HPV with a negative cytology had almost twice the risk of having a CIN3 identified over a three-year period when compared with women who were HPV positive with a negative p16/Ki-67 dual stain.14 In addition, the sensitivity of cytology for identifying CIN3 over a three-year period in HPV-positive women was only 52%, whereas the sensitivity of positive p16/Ki-67 dual stain was 75%. While the specificity of p16/Ki-67 dual staining was almost equivalent to Pap cytology, dual staining was more useful in triaging women who were positive for any of the 12 other HPV genotypes when compared with Pap cytology (87% versus 78%).14

A prospective observational study of over 1500 HPV-positive women from Kaiser Permanente Northern California (KPNC) who were screened with HPV/cytology co-testing validated the use of p16/Ki-67 dual-staining cytology in the triage of women positive for HPV infection.15 In this study, 3,000 HPV-positive women were followed in the KPNC system for up to three years, and dual-staining cytology outcomes were compared to standard cytology. Results from this study demonstrated that, as opposed to cytology, dual staining was associated with a better risk stratification for CIN3 or greater (CIN3+).15 Dual stain-positive women had a 12% risk of CIN3+ over the three-year period, whereas those women who were cytology positive had a 10% risk of developing CIN3+. This translates into a substantial real-life difference across a large population of women. Importantly, women who were HPV 16/18 negative and who were also negative for p16/Ki-67 dual staining had a low enough risk to be placed into an extended follow-up, as opposed to requiring annual colposcopies or annual cytology examinations, thereby addressing the issue of unnecessary tests.15

Primary HPV testing is suggested for the screening of women ≥25 years of age (Figure 2). 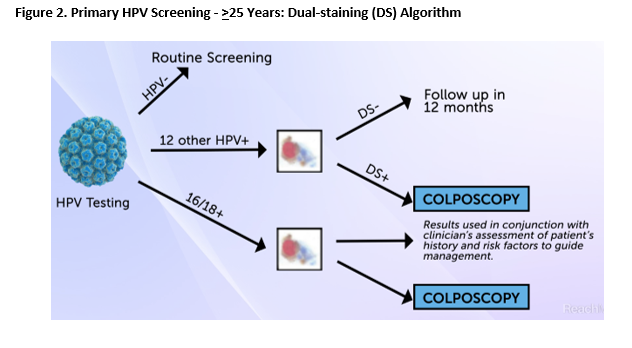 As shown, those women who test negative for HPV can be followed up with routine testing. However, if a woman is positive for any of the 12 other HPV genotypes, dual stain cytology is recommended, as opposed to cytology, to determine which women require a confirmatory colposcopy. If the woman is dual stain positive, she will be triaged to colposcopy; if she is dual stain negative, then she will be followed-up in 12 months. While all women who are HPV 16/18 positive will go on to colposcopy, management benefits emerge when testing these women with dual staining as it lets the colposcopist know which women are at greatest risk for a high-grade lesion. Thus, using dual stain cytology allows the clinician to modify their treatment and ensure they are focusing their efforts on the women at highest risk.

Figure 3 illustrates that dual staining can also be used to triage women ≥30 years of age who have undergone both cytology and HPV testing (co-testing). 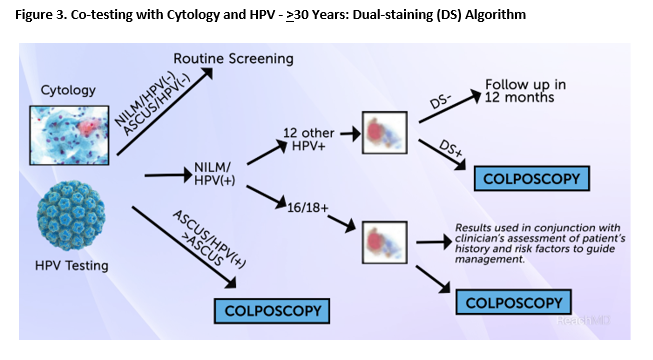 As shown, women who are positive for HPV and atypical squamous cells of undetermined significance (ASCUS) or have a lesion >ASCUS will move directly to colposcopy. Conversely, those women who are HPV positive but are negative for intraepithelial lesions or malignancy (NILM) on cytology will have both HPV genotyping and dual staining. Those women who are positive for any of the 12 other HPV genotypes will receive dual-staining cytology, and depending on the dual stain results, will be either followed up in 12 months (if dual stain negative) or sent to colposcopy if dual stain positive as they are considered at high risk with known (NILM) cytology. Thus, use of p16/Ki-67 dual-staining cytology provides a very useful risk stratification. As mentioned previously, there is also a benefit in performing dual staining for women who are HPV 16/18 positive as they are at the greatest risk for having high-grade lesions; their physician can then modify management appropriately.

While current cervical cancer screening methods are extremely sensitive, the difficult issue facing clinicians is how best to triage women whose initial screen indicates they are HPV positive. How can women who are at low risk for developing a high-grade cervical lesion be identified and managed with routine screening? And conversely, how do we identify those women who are at greatest risk for developing a high-grade cervical lesion and move them to necessary colposcopy and workup? The goal is to ensure that women who need colposcopy receive colposcopy, while those women at relatively low risk for CIN3 are followed instead.

This objective will require new and sensitive triage approaches, and p16/Ki-67 dual-staining cytology appears to have the potential to bring further confidence to our tactics surrounding the triage process.

Learn how to reduce diagnostic uncertainty and poor patient management through improvements to the current approaches to CCS triage.

If you’ve already completed the activity.

Stay current with the best on medical education

Register for free
You are now leaving Global Women's Health Academy and going to a site run by another organization.

Press cancel to remain on Global Women's Health Academy. Press the link below or the continue button to keep going.